Audrey Tautou is lovely in this period-piece love story that falls short of biopic greatness.
Camerin Courtney|September 25, 2009
Our Rating

By all accounts, Gabrielle "Coco" Chanel was ahead of her time. This early 20th century fashion icon was one of the first designers to free women from corsets and over-the-top frou-frou and bring elements of male fashion and sportswear to women's clothes. She declined to marry any of her many love interests and finagled ways to launch a fashion empire on her own terms, making her a feminist of sorts long before the word even existed. Her contributions to the world of haute couture earned her a spot on Time magazine's list of the 100 most influential people of the 20th century, the only person in the world of fashion to earn this honor.

Coco Before Chanel (in French with subtitles) gives us a peek at this fashion-forward woman ahead of her time in the spotlight, focusing on her surprisingly dramatic and difficult beginnings. In the opening scenes, she's just a young girl being dropped off at an orphanage with her sister, Adrienne, following their mother's death and father's abandonment. This home for girls is run by nuns—and as the camera lingers over their simple black-and-white habits with the odd, elegant angles, those who know of Chanel's signature simplicity will see inspiration for things to come. 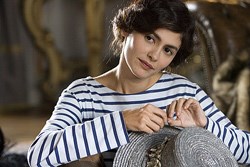 We then skip ahead about ten years to when the teenaged sisters are working in a tailor shop by day and a cabaret by night, hoping to make their big break so they can move to Paris. It's there, amidst the drunken sailors and busty prostitutes, that one of the songs the sisters performs earns Gabrielle (Audrey Tautou) the nickname "Coco."

While Adrienne (Marie Gillain) is romantic and optimistic about her future with a baron who frequents the cabaret, Coco is jaded about men and love, claiming "a woman in love is helpless, like a begging dog." Yet she strikes up an affair with a visiting rich playboy, Balsan (Benoit Poelvoorde), hoping his money and connections will help the sisters get ahead.

But then Adrienne tells her sister she's moving to Paris to marry the baron. Balsan adds his goodbyes before he returns to his country estate outside Paris. And Coco realizes she's alone, a fearsome thing for an orphaned woman in early 1900s France. 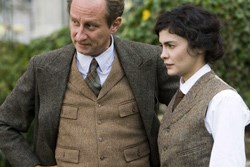 So she boldly gathers her things and shows up at Balsan's estate for an unannounced visit. He gives her two days to stay, but eventually turns her into his mistress-in-residence. It's a mutually beneficial arrangement: Coco gets financial security and luxurious surroundings, and Balsan gets a young fling. But this arrangement is not without its complications, especially when Balsan's friend Arthur "Boy" Capel (Alessandro Nivola) comes to visit and finally makes Coco a believer in love.

These complicated relationships—between Coco and Balsan, and Coco and Boy—fill the majority of the film, and certainly some of the most intriguing parts. Especially the relationship between Coco and Balsan. There are such mixed motivations for this pairing, not an uncommon thing during a time when men had nearly all the power. (Yet another period piece that makes me grateful to be a woman alive now.) But these selfish motivations evolve and soften over time, offering a fascinating "love" story. 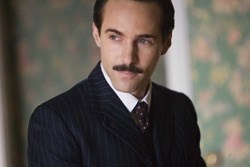 Between these romantic scenes, we see glimpses of Coco the budding hat designer. She deconstructs the wildly feathered and ribboned hats of the day and crafts instead much simpler, understated looks. This isn't just a change in fashion, it's a change in paradigm. Women of that time adorned themselves in countless jewels, feathers, laces, and other bric-a-brac to prove their wealth. Removing these things required confidence in other things, placing value elsewhere. One gets the sense Coco is freeing these women not just from their weighty hats, and later their constricting corsets, but also from the oppressive rules and value systems handed to them by society. It's ironic that she has to use her sexuality to gain entrée into certain social circles and to find the capital to launch her business in order to free women so.

Tautou is as lovely as ever here as the iconic Coco Chanel. She embodies the role on her own terms, filling it with her own elegance and charm. And she offers believable chemistry with both of her love interests, and even good friend-chemistry with Emmanuelle Devos, as the actress Emilienne who sort of takes her under her wing. Benoit Poelvoorde gives us a compellingly complicated Balsan; just when I want to hate him, he shows just enough emotion to prevent him from becoming a one-dimensional meanie.

The locations (all French) and fashions also offer rich supporting roles throughout the film, dazzling but never distracting from the story at hand. 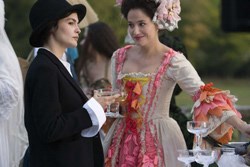 The title character with her sister Adrienne (Marie Gillain)

Unfortunately, the story at hand gets a bit fuzzy by the end. After a predictable bit of drama (though it's hard to fault a film for that when it's based on true events), the film lurches forward to Coco the established designer. We see her at a runway showing of some of her signature suits and little black dresses, and then there are a few epilogue updates on Coco's life before the credits roll. The end feels rather abrupt.

Overall, there's a subtlety to the film that's almost too subtle. Those who aren't familiar with Coco's signature looks over the years will miss some of the scenes that show their inspiration. We know Coco because of her fashion empire; this is why she's an interesting character. Without the links between her early years and her later fashion-icon decades, the film loses some of the unique appeal of a biopic.

As is, Coco Before Chanel is more of a period-piece love story that touches on the challenges of being a woman in early 20th century France. Oh, and the main protagonist sews her own avant-garde clothes and makes a few hats. A bit more of Coco becoming Chanel was what I expected, and what would have elevated this film beyond the typical period-piece love story fare.

Coco Before Chanel is rated PG-13 for sexual content and smoking. We see characters smoking and drinking throughout the film. The cabaret scenes offer lots of cleavage, and one character buries his head in a woman's heaving bosom. Several characters sleep together before marriage, and sometimes for manipulative reasons. Though it's a relatively "clean" movie (no nudity, no real violence, no swearing), the complicated adult relationships make it an iffy choice for younger audiences—if they'd even sit through this period piece.