Dr. Burke Ryan (Aaron Eckhart) is a self-help guru. His best-selling book, A-Okay, about grieving the loss of a loved one, has birthed seminars across the country. And thanks to his wheeler-dealer manager Lane (Dan Fogler), he's on the cusp of signing a deal for a book series, a syndicated TV show, and a line of merchandise that includes exercise equipment and weight-loss supplements ("making loss a good thing").

Too bad Burke is so emotionally shut down he can't enjoy any of his success.

His life is a series of well-ordered routines, neutral hotel rooms, and surprising contradictions. His book warns against the crutch of alcohol and encourages practicing happiness with five minutes of daily smiling. Yet we see the good doctor hitting the mini-bar and sitting in a stone-faced stupor in his lonely hotel room. 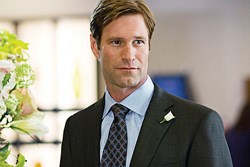 Likewise, there's a staggering disparity between the forlorn look on his face in the hallway just moments before his opening talk at the A-Okay Seattle seminar and the brilliant smile he flashes to this roomful of grieving groupies. It's not that Burke is insincere; he truly wants to help these people. It's just that it's easier to help them deal with their grief than to dig deep and finally confront his own unresolved pain over his wife's sudden death in a car accident three years prior.

But a few encounters at this Seattle seminar start to shake things up.

Burke is moved by one of the conference attendees, Walter (John Carroll Lynch), a burly contractor who's just lost his 12-year-old son. Walter has a finely tuned crap-ometer, and doesn't buy all of Burke's fortune-cookie wisdom. Their conversations force both men to dig deeper into their own personal hurt.

After a session one day, Burke's estranged father-in-law (who lives in Seattle) shows up and reads him the riot act for turning his daughter's death into a series of silly quips and personal financial gain. He (Martin Sheen) calls Burke a hypocrite and hints that there are other aspects of Burke's wife's death we don't yet know. 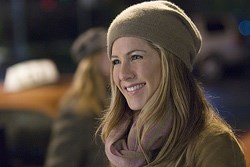 But, of course, the most impactful encounter at the conference is with Eloise (Jennifer Aniston), the beautiful florist Burke spies arranging bouquets in the hotel lobby. With some nudging from Lane and a big gulp of bourbon, Burke musters the courage to ask her out. While the invite doesn't go quite as hoped, the two do eventually wind up on a date together. While that doesn't go so great either, thankfully this is the movies, where the forgiveness and second-chance factor are pretty high.

We know from their first yelling match that these two are a good fit. They're both messed up and jaded. Eloise is a free spirit; Burke isn't enjoying his life. Eloise keeps trying to fix her succession of ill-chosen bad-boy boyfriends; Burke needs to be fixed himself. Eloise inexplicably scribbles obscure words on hotel walls; Burke has an inexplicable aversion to elevators. Eloise has amazing hair; Burke has great teeth.

Okay, so yes, this is a pretty by-the-numbers Hollywood romance. There's the meet cute. The requisite hurdles for the relationship. The personality quirks that are somehow cute and endearing instead of ugly and unhealthy. The edgy but good-hearted friends. The cool city they all traipse around in like characters in a vodka commercial or cologne ad. 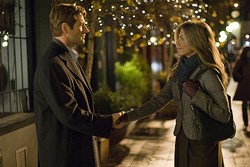 Their first date doesn't end all that well

Thankfully, Aaron Eckhart and Jennifer Aniston both bring oodles of charm to Burke and Eloise. They create likable characters. And they're just so dang attractive to watch. In fact, the whole movie is well and impressively cast. Even the city of Seattle, with its quirky yet accessible vibe and occasional downpours, is well chosen for this movie about love and loss.

It's this latter theme that's surprising in this romantic comedy. At times it brings needed gravitas, offering poignant moments that buy some grace for the predictable ones. At other times it's just a downer, or is so grief-lite it's almost funny.

But then, the whole movie is much better if you can turn off your reality-meter. Because I don't buy that this guy who hasn't truly grieved wrote this book, especially not thinking no one else would read it. And I don't buy that this book full of "happiness is a state of mind" truisms would be a national bestseller. And I don't believe that people would come to a week-long seminar on grief. And that covers just the first ten minutes of the film. 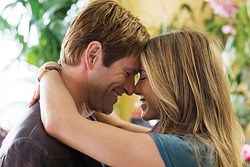 Looks like a good scene for a movie poster, only in reverse

That said, the movie does have a lot of heart. In our age of raunchy romances, Love Happens is refreshingly clean and dignified. In our culture of snark, it's sweet to watch these conference attendees root for each other and help each other heal. In our tough economic climate, it's kinda nice to unplug and watch a world where grief is eased with a walk on coals or a coffee date with a pretty girl in a fetching hat.

If you're the sort who can't suspend reality, even in the movies, or if the words "romantic comedy" make you shudder, skip this one. If you're a rom-com devotee, or a big fan of Aaron or Jennifer's, get yourself to the theater pronto. But for most of us, Love will happen best as a rental on a night when you just want a cute film that offers an innocuous and entertaining escape for an hour and a half.

Love Happens is rated PG-13 for some language including sexual references. The language is pretty mild and sporadic. Burke gives Eloise the finger. We do see flashbacks of the car accident that killed Burke's wife, but it's really just a view of the out-of-control car and not of the injured passengers inside. Several characters talk of loved ones who have died, and we see these adults trying to deal with their grief. We see several characters smoking a hookah, which is legal in the U.S., but might look like illicit drug use to those who aren't familiar with this Indian/Middle Eastern tradition. Otherwise the movie is pretty clean. The romance is really tame and the most we ever see is a kiss.

1 of 4
Aaron Eckhart as Burke RyanJennifer Aniston as EloiseTheir first date doesn't end all that wellLooks like a good scene for a movie poster, only in reverse