In the 1960s, a girl and boy meet in second grade, and navigate a romantic relationship over the next five years—but it never finds the magic of Rob Reiner's best films.
Frederica Mathewes-Green|August 27, 2010
Our Rating

Can it be love at first sight if you're seven years old? Flipped proposes that, yes, it can, if you're a bold and lively little girl; the little boy who is the object of her affection might need a few more years to catch on. When Juli Baker spots the Loski family moving in across the street, she strides right into the moving van and tries to lend a hand. Bryce and his dad are put off by her intrusiveness, and Bryce escapes under the pretense that his mother is calling him. From Bryce's perspective, goofy Juli just can't take a hint and runs after him, pursuing him to the point that he has to hide behind his mom.

But then the episode is run through again, this time from Juli's point of view. What Juli sees is that Bryce is just as smitten as she is. When he pushes her hand away, he's trying to hold it, she thinks. She reads in his "dazzling eyes" a love that is fully requited. He's "walking around with my first kiss inside of him," she tells herself.

Thus begins "a half-decade of strategic avoidance and social discomfort," Bryce tells us. Juli continues to get starry-eyed whenever Bryce is around, even leaning forward from her school desk to sniff his hair, to his overwhelming embarrassment. Through the years Bryce continues to be discomfited and irritated by her attentions. It doesn't help that Juli's family is weird: her overworked mom cooks, cleans, and holds down a job while her dad stands outside painting landscapes. Their front yard is a wreck, the embarrassment of the neighborhood, and Juli develops a habit of spending hours sitting in a sycamore tree.

Then, when Bryce is in 7th grade, his recently-widowed grandfather Chet comes to live with the family. About this time Juli learns that her tree is going to be cut down, ... 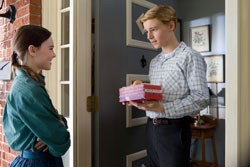