Veteran director Rob Reiner, whose new film 'Flipped' opens this week, is getting more serious as he ages ... but admits that part of him is still stuck in the 1960s.
Mark Moring|August 23, 2010

The calendar says Rob Reiner is 63, but in some ways, he's still stuck in adolescence. And he's the first to admit it.

The veteran writer/director (The Princess Bride, Stand by Me, When Harry Met Sally, The Bucket List) is feeling his age in some ways; he says he's learning that life is precious, so he's trying to make movies with more depth and significance—much like his favorite film of all time, It's a Wonderful Life.

Reiner has come a long way from his days as Michael "Meathead" Stivik on the great 1970s sitcom All in the Family. He's settled down, been married 21 years, and has grown into one of America's most beloved directors. But he's still drawn to the days of old, to those teen and tween years of angst and powerful (even conflicting) emotions—so well depicted in Stand by Me. And now Reiner, who once told the New York Times that he thinks of himself as "a very young old person," is revisiting the same era in his latest film, Flipped, a sweet romantic comedy opening this week.

Based on a novel of the same name, the film's story takes place in the 1960s, centering on tweens Bryce Loski and Juli Baker. She fell for him back in the second grade, but he's girl-phobic and the vibe is quite unrequited. But over the next six years, especially as they move into junior high, Bryce's feelings begin to change … maybe. Meanwhile, their very different families also have much to learn from one another—and that things aren't always as they might appear on the surface.

We recently caught up with Reiner to talk about the movie, his own childhood (and his first love), and how getting older has helped him to appreciate "family values" more and more—even as he longs for the old days of growing up in the '50s ... 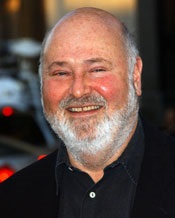