Douglas Gresham, C. S. Lewis's stepson and co-producer of the Narnia movies, is the keeper of his stepfather's flame.
Mark Moring|December 3, 2010

When 2005's The Lion, The Witch, and The Wardrobe—the first film in the Chronicles of Narnis series—was being filmed in Prague, the American ambassador to the Czech Republic visited the set. Producer Mark Johnson introduced the man to co-producer Douglas Gresham, the stepson of C. S. Lewis who had the task of ensuring filmmakers got everything right. He was essentially his stepfather's eyes and ears on the project. 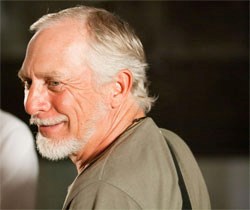 Gresham says he fights for the 'moral messages' in the films

When the diplomat asked Johnson about Gresham's role, Johnson quipped, "Oh, he's to blame." They all had a good laugh, but Gresham knew it was absolutely true: "That just about sums it up," he says today. When Narnia fans complain about how the films—Prince Caspian released in 2008, and The Voyage of the Dawn Treader hits theaters on at midnight on December 9—have strayed from the books, Gresham is their first target.

We spoke with him recently about playing that role.

Some fans think you've allowed the filmmakers to stray too far from the books.

Well, I do my very best. I don't always win my battles, and I fight a lot of them. Some I win, some I lose, some I compromise. It's not an easy job. I'm not always diplomatic; sometimes I'm pretty blunt. Sometimes I get up people's noses and make a real nuisance of myself. But there are things I will insist on.

It's often to do with the theological or moral messages. I'm not saying that Hollywood people want to take them out, but often they just don't see it or understand the significance. Jack [Lewis] was very conscious of the fact that in the twentieth century, Western societies had decided in their infinite stupidity to dispense with the great nineteenth century values that were so important—personal responsibility, commitment, courage, chivalry, courtesy. The Narnian Chronicles teach such things, so I fight for those fairly hard.

What have you fought for on Dawn Treader?

I'm not going to tell you, because that wouldn't be fair to the people who fought with me! But I will say this: Dawn Treader is all about what happens when you commit your life to Christ and how the Devil gets at you. It's about temptation and what you do about it. 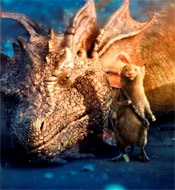 Eustace (as dragon) and Reepicheep

There were early rumors that Eustace, after he becomes a dragon, would fight with the sea serpent. That's not in the book.

Some folks were attracted by the idea that the dragon—Eustace—would earn his redemption by having a huge fight with the sea serpent. But I don't think that earning one's redemption is possible. It's a free gift from Jesus. So that scene is not in the movie. That was a nonnegotiable point for me. [Since this interview, CT has seen the film, and would contest Gresham's assertion that the dragon Eustace doesn't have a "huge fight with the sea serpent." Looked pretty huge from our seat.]

Filmmakers look at making a movie entirely from a filmmaker's viewpoint. I have to be both filmmaker and Narnia watchdog, and balance the two. It's not easy; it's a lot of pressure. People rely on me to do everything I can as a Narnian purist to keep these movies accurate—and to keep them Narnian. And when I make mistakes, they let me know about it. It's me who copes with the flack, but that's what I'm here for.

What's been the biggest complaint about the films?

There are people who don't believe anything should be in the movie that's not actually in the book—including set design, scripting, anything you can think of. This is on the same level, to a certain extent, as people who say you shouldn't go to McDonald's because there are no hamburgers in the Bible. People take it to extremes.

Can you give an example?

There was a rumor [before Prince Caspian released] that Caspian was going to have a huge romance with Susan. We rejected that idea early on, but it really got people worried on the Narnia fan sites. Somebody finally asked me, "What's happening here?" I said, "Look, there are important things to worry about, like global warming. I suggest you pay more attention to them than whether there's going to be a romance between Caspian and Susan." I knew there wasn't going to be a romance, but I wasn't going to say so.

Well, they did make eyes at each other, and they kissed at the end …

Look. You've got a beautiful woman and a handsome guy in an adventure together. Let's face it: They are going to make eyes at each other. And of course they kiss goodbye in the last scene, because here's this woman that Caspian's become attached to and he's never going to see her again. End of story. I don't regard that as a romance. I agree that it shouldn't have been in the movie; I think it was nonsense. But it wasn't something I was going to dig my heels in and scream and bite the carpet about.

Because it wasn't one of the bigger themes, or a theology issue?

Exactly. It did annoy a lot of Narnian purists that these two teenagers should actually be the least bit attracted to each other. I think the purists were just as out of line as the people who put that scene in, which I think was unnecessary and rather silly.

You're being diplomatic in calling them "Narnia purists." Others have called them the Narnia police.

Some are concerned that a professing agnostic, Michael Apted, directed Dawn Treader. 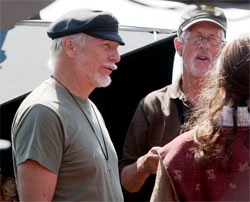 Gresham and director Michael Apted on the set

Why would one be concerned? When Tony Hopkins played C. S. Lewis in Shadowlands, he had just played Hannibal Lecter in Silence of the Lambs. He said, "Playing C. S. Lewis did not make me want to become a Christian anymore than playing Hannibal Lecter made me want to become a cannibal." So why shouldn't an agnostic direct this? The temptation for a Christian director would be to put his own Christian beliefs to the forefront. An agnostic is probably a good choice in that he doesn't really believe that there is a God, but he doesn't really have an antagonistic agenda either. If the man was a rabid atheist, we might have more problems.

What are your hopes for people who see Dawn Treader?

I would like them to walk out of the theater delighted with the movie they've seen, and with a deeper understanding of temptation and how to deal with it.

For more articles and resources about this movie, see our Voyage of the Dawn Treader special section.