The last days of literary legend Leo Tolstoy's life provide backdrop for a moving examination of the messiness of love.
Brett McCracken|January 15, 2010
Our Rating 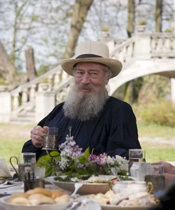