The veteran actor discusses his new film 'Get Low', a folk tale about an eccentric recluse—and gets a little feisty about 'The Apostle.'
Mark Moring|July 27, 2010

Ever wonder what people will say at your funeral? That's pretty much the premise of Get Low, a new film releasing this week and starring Robert Duvall as an eccentric recluse living in the hills—while all the townsfolk share wild (and mostly untrue) stories about him.

A Southern folk tale based in the 1930s—and based on a true story of a Tennessee man who lived at that time—the film features Duvall as Felix Bush, a loner who decides to hold a "living funeral" so he can hear what the people are really saying about him. It's a stellar film, with themes of forgiveness and redemption, and features a dazzling cast, including Oscar winners Duvall and Sissy Spacek and Oscar nominee Bill Murray.

Duvall, who will be 80 in January, tells CT that Get Low is one of his favorite movies that he's made. He compares the story with the Horton Foote-written films in which he's starred, including To Kill a Mockingbird and Tender Mercies (for which he won the Oscar for Best Actor).

Duvall, who likes to play flawed men because they bring more "drama" to the story, also talked about his role in 1997's The Apostle, a tale rife with moral complexity in which he plays a feisty Southern preacher in need of some anger management. The actor got a little feisty himself when we asked him whether that movie was subtly mocking Pentecostals and charismatics.

You have a history of playing flawed, complicated, broken men. What attracts you to these roles?

Well, they present themselves to me, and those characters make good drama. If people don't have conflicts, contradictions, and faults, then there is no drama there. My favorite part of all time was probably Gus McCrae in Lonesome Dove; I also played Josef Stalin in a TV movie. I also always ... 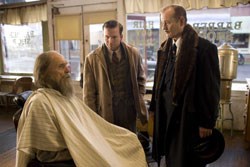