Although it fails to live up to the 1984 original, the star power of Jaden Smith and Jackie Chan helps make this martial arts underdog story a winner.
Carolyn Arends|June 11, 2010
Our Rating

If you were alive and out of diapers in North America in 1984, you probably remember Ralph Macchio and Pat Morita in The Karate Kid. If, like me, you were a teen back then, Mr. Miyaga's eccentric karate instruction methods ("wax on, wax off") have likely become a part of your pop culture psyche. The Karate Kid's enduring legacy makes the current remake seem inevitable. The question, of course, is whether the long shadow cast by the original makes the copy inevitably disappointing.

The answer: Yes and No. The new Karate Kid is not as good as the first. But it's not bad, either, and the reaction of youngsters at the screening I attended suggests viewers who haven't seen the original will definitely enjoy the new edition.

This time, our young hero is an African-American 12-year-old named Dre Parker (Jaden Smith, son of Will Smith), who is dislocated from his home in Detroit and plunked down in Beijing when his widowed mother is transferred by her employer. Dre is understandably unhappy with such an extreme move, but the charms of a violin-playing classmate named Meiying (Wenwen Han) get him thinking his new life might be OK. His optimism is short-lived, however, when a jealous local named Cheng (Zhenwei Wang) and his thuggish friends begin routinely delivering kung fu beatings to Dre for the crimes of being an outsider and catching the pretty girl's eye.

The situation continues to worsen until Mr. Han (Jackie Chan), the reclusive maintenance man at Dre's apartment building, steps in to stop an attack and reveals his secret identity as a kung fu master. Mr. Han confronts Cheng's teacher, who is misapplying the martial arts and instructing his students to be on the attack and show no mercy. In an effort to remove the imminent threat ... 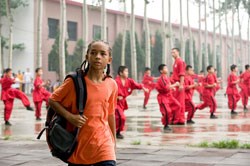