After more than three decades in the business, Amy Grant has lived life's highs and lows and everything in between. She chronicles the journey on her new album.
Mark Moring|March 30, 2010

It's been more 30 years since I, as a relatively new Christian, was first introduced to the music of Amy Grant—a fellow teen at the time (and the object of much smitten-ness from my college buddies and me).

We've all lived a lot of life since then, most of us outside of the public spotlight. But not Grant, who went from Christian music's darling to being one of its first major "crossover" artists in the 1980s, and then to public scrutiny for her 1999 divorce from Gary Chapman (with whom she had three children) and her 2000 marriage to country music star Vince Gill (with whom she has a 9-year-old daughter).

These days, Grant says she's happier than ever, while also wrestling with "a lot of uncertainty within my extended family as we've experienced pain, loss, and joy"—including the recent death of a friend and the decline of her mother's health. It's been an emotional roller-coaster for the six-time Grammy winner, who turns 50 later this year. She chronicles that ride in her stellar new album, Somewhere Down the Road, which includes six new songs, two previously unreleased tracks, a new version of "Arms of Love," and three songs from earlier CDs. All were chosen to reflect Grant's own trek "down the road"—its highs and lows, joys and pain, and everything in between.

We recently caught up with Grant to talk about the album, her career, her family, and that often bumpy road of life.

Let's go back to your first albums—all that shiny, happy Christian music. Would you have ever thought, as an 18- or 20-year-old, that you'd be writing songs of pain and struggle like those that appear on this project?

I think I understood angst when I was young. I might not have known how to write about it, but … On my ... 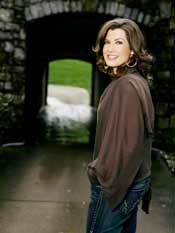