Though marketed as an action flick, RED does not begin or end as you might expect. The film's first 10 minutes are more in line with a quirky romantic comedy, while the final scene—without giving anything away—is absolutely insane, along the lines of a Monty Python sketch (and far sillier than anything preceding it). Yet this mix of genres serves the movie well, ultimately giving it broader appeal.

We first meet 55-year-old Frank Moses (Bruce Willis) quietly adjusting to a lonely life of early retirement in suburban Cleveland. Spending most of his time exercising and keeping his house clean, the only bright spot in his dull existence is a budding long-distance relationship with Sarah (Mary-Louise Parker), an equally lonely 40-something who works for the Department of Revenue in Kansas City. Frank tears up his pension checks after receiving them in the mail as an excuse to call Sarah, and the two sweetly talk about trashy novels and travel dreams during their regular phone exchanges. You'll swear you walked into You've Got Mail by accident.

That idea gets blown away (literally) when a team of shadowy operatives arrive at Frank's house in the middle of the night, turning it into Swiss cheese with their machine guns—and then Frank disposes of the assassins with cool efficiency. Turns out he's a former black-ops CIA agent tagged as "RED"—Retired and Extremely Dangerous. (Kinda gives new meaning to respecting your elders, eh?)

Why are people trying to assassinate Frank now that he's laying low in his golden years? Sure, it might have something to do with his mysterious past, but he assumes the catalyst involves his conversations with Sarah. Traveling to Kansas City to protect/kidnap her, Frank begins a fast-paced ... 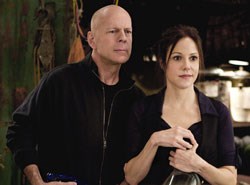