The Facebook creation myth comes vividly to life in this sophisticated film.
Alissa Wilkinson|October 1, 2010
Our Rating

It's August 2004. I'm sitting in an ugly chair in the student union with my laptop balanced on my knees, checking my senior year course schedule. I had spent the summer working as a student orientation advisor for incoming freshmen. My coworkers and I had had a fantastic time working and living together, and we're sad that we can't keep up with one another as well as we'd like, now that classes are starting and the campus is filling back up.

I open my e-mail and there's an invitation to join a site called thefacebook.com. I think it might be spam, and I'm about to delete it when two girls walk by and I hear them say something about a "face book." Well, okay, I think. And I click on the link.

A week later, campus productivity has all but disappeared. We routinely tell people to "just facebook me." Many of us now know things about that guy we sat next to in physics last year that we used to not know about some of our friends: political and religious beliefs, favorite bands, relationship status. To my excitement, this website means my friends and I can now keep in touch more easily, even though we've all gone back to our daily world of classes, homework, and clubs. 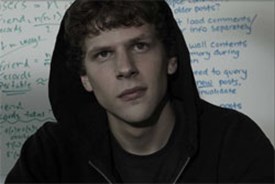 Six years later, I (and five hundred million other people) can hardly remember that world, in which if you failed to get someone's phone number, you might never see them again; where you couldn't see pictures from last night's party online the next day; where leaving a note on your friend's "wall" was an act of vandalism, or would at least leave a few thumbtack holes.

In spring 2003, not long before his website changed our world, a misanthropic but vaguely hapless sophomore at Harvard named Mark Zuckerberg (played by the excellent Jesse Eisenberg) could bring down an entire network in a couple of hours by just throwing together a website between late-night beers.The Social Network is his story—kind of. It's also the story of his friends and acquaintances, of those suing him and those wondering why it all matters. It's the curious tale of a social outsider who became the gateway for social interaction. And most importantly, it's a story that embodies the generation that was willing redefine privacy to digitize their world.

Writer Aaron Sorkin (The West Wing, A Few Good Men, Charlie Wilson's War) tackles the tricky task of untangling the Facebook founding myth. The facts have never been very clear, and everyone's account differs. So Sorkin simply gives us the various versions of the truth and lets us wonder. (You might ask: Who cares who actually came up with the idea for Facebook? Well, for starters, the site is now worth around $25 billion, and Zuckerberg owns half of it.) 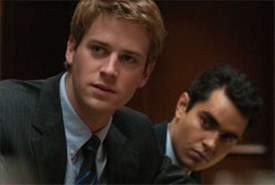 Zuckerberg's success with Facemash—the site he put together in the middle of the night—attracted the attention of Harvard officials, who put him on academic probation for violating privacy restrictions and bypassing security regulations, and some fellow students—twins Cameron and Tyler Winkelvoss (Armie Hammer and Josh Pence) and their business partner, Divya Narenda (Max Minghella), who were developing a website called the Harvard Connection. Like MySpace, the site would let users create a profile and add others as friends; unlike MySpace, the site would be exclusive, available only to those with a harvard.edu email address.

What exactly happened next is unclear. The film skillfully skips between the narrative (much of which is imaginative reconstruction of what could have happened) and testimonies in various lawsuits brought against Zuckerberg. What we do know is that Zuckerberg never ended up writing code for the Harvard Connection, but did end up writing a website he called TheFacebook.com that became a social institution overnight, funded by his friend Eduardo Saverin (brilliantly potrayed by Andrew Garfield), who became CFO of the company. They did become campus celebrities, and soon much more. The site did expand beyond the Harvard campus and dropped the "the" to become Facebook. Zuckerberg and Saverin did meet Napster founder Sean Parker (Justin Timberlake, ideal in this role), who introduced them to the venture capitalists who made them very rich young men. There were two lawsuits brought against Zuckerberg—one by the Winkelvoss twins and Narenda, and one by Saverin.

Facebook grew so rapidly that today, if it were a country, it would have one and a half times the population of the United States. And Zuckerberg, at 26, is the youngest billionaire in the world.

The Social Network is a story, not a history or a biopic, and unfortunately it's hard to know how much of this movie is just made up. But that's also somehow fitting, because it also marks director David Fincher's return to one of his favorite themes: anarchy. To be someone like Zuckerberg or Parker (who boasts of bringing down the recording industry, even though he's now bankrupt) is to not simply subvert, but completely ignore the usual channels through which power flows: wealth, authority, age, experience. Though Fincher most obviously explores anarchy in Fight Club (and there's a Tyler Durden reference buried in this film), all of his protagonists are antiheroes on the outside, always looking in, always more clear-eyed than the folks who are content to live a conventional life. 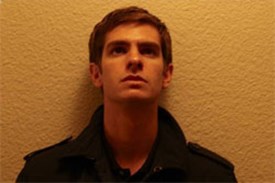 So it's no surprise that while The Social Network is a glossy, sexy film, it's mostly not about glossy, sexy people. Zuckerberg has a talent for alienating people and is utterly incapable of reading social cues or making nice for his own gain; he and his few friends, even the coolest among them, don't represent the pride and joy of Harvard the way the strong-jawed, well-spoken Winkelvoss twins do. Plenty of popular kids hang around this movie, but this isn't their story. Every bit of it buzzes with a kind of underground frenetic energy—from the signature Sorkin rapid-fire dialogue (can you keep up?) to the soundtrack (co-written by Nine Inch Nails's Trent Reznor) to the dynamic cast, who had the unenviable task of trying to portray their contemporaries (Eisenberg is a mere six months older than Zuckerberg).

Most everything about The Social Network is successful, but its real achievement stretches beyond the Facebook story. Decades from now, when we've all forgotten what Facebook even was, The Social Network will still tell us what it was to be part of the generation sociologists are calling the Millenials. I'm part of this generation, and I teach students who are, too, and what I see is this: Like Zuckerberg, who argues against advertising that would take away Facebook's "cool" factor, Millenials care more about constructing their image and gaining influence than having a lot of money. Privilege and wealth are useful tools toward constructing an attractive identity, but knowing the right people, listening to the right music, and being in the right place at the right time is much more important.

Millenials are defined by their craving to belong; Zuckerberg desperately wants to be part of one of the private social clubs at Harvard because "they're exclusive, and fun, and lead to a better life." They're willing to radically redefine the idea of privacy—to post their political views and favorite bands and pictures from summer vacation on a website for their "friends" to see—in order to gain that sense of belonging. Millenials won't listen to you unless they first like you: because Parker fascinates and pursues Zuckerberg, because Parker seems to care first about power and image and then about money, Zuckerberg trusts Parker—maybe too much. 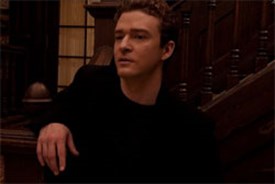 So in some ways, Zuckerberg is the archetypal Millenial. But is Zuckerberg the villain of this story? No. In fact, we can't help but agree when he tells someone that he's not a bad guy. Confused, yes; angry, yes; young and impulsive and occasionally stupid, yes. It's just that his youthful indiscretions and missteps, though they lost him friends, also made him into a billionaire and a kind of anti-celebrity.

But thanks to Zuckerberg's creation, which effectively puts real life online—where, as one character points out, history is written in ink, not pencil—a whole generation can follow in his footsteps. Whatever might be true in The Social Network, one fact is undeniable: what Zuckerberg did was change the world.

The Social Network is rated PG-13 for sexual content, drug and alcohol use and language. Characters have sex in a bathroom, and other characters wake up in bed together, though we don't see anything. Characters go to a club where girls dance in lingerie. Various people do drugs at parties, once off a girl's bare stomach.