If Mufasa starred in BBC's 'Planet Earth', we might get something like this documentary.
Katelyn Beaty|April 22, 2011
Our Rating
not rated
Average Rating
(3 user ratings)ADD YOURS

A pride of lions lives in perfect harmony on the African savanna. After their aging leader disappears, the lions struggle to survive, dodging hyenas and wildebeests. Mostly mothers and cubs, the vulnerable pride comes under the fierce reign of a new lion king who has chased off the old one. A warthog and meerkat make an appearance.

Hakuna matata. Watching African Cats made me feel 10 years old again, though not for the reasons one might assume. That would be 1994, when Disney's The Lion King debuted to universal praise, garnered two Oscars for its original soundtrack, and launched a multimillion-dollar franchise that includes a Broadway musical and those direct-to-video sequels. The bad news about African Cats is that it conspicuously parrots its 2D predecessor in narrative themes. The good news is that if you take your children to African Cats, they won't know or likely care.

Like DisneyNature's previous films, Earth (2009) and Oceans (2010), also released on Earth Day, African Cats—a sweeping family epic gleaned from two years of footage—captures rare moments of nature's unfolding drama, this time in the Masai Mara National Reserve of southern Kenya. African Cats strings these moments together in an emotional drama underscoring the bond between mother and child. It follows three feline families through the rainy season up through the annual wildebeest migration. Sita the cheetah is a single mother raising five cubs to face the savanna's many threats. Layla the lion is the lead hunter of the River Pride with a six-month-old cub, Mara. Kali and his four lion sons rule the kingdom north of the Talek River, and are waiting for it to recede to conquer the south kingdom and its lionesses, who follow the mangy Fang.

Our Rating
not rated
Average Rating
(3 user ratings)ADD YOURS 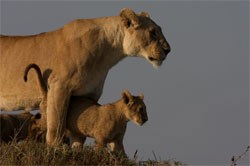