A California congregation joins the parade with a film about human trafficking. But is it a good trend?
Kim Lawton|April 20, 2011

Frustrated with the movies Hollywood has been releasing, more and more congregations are making their own feature films. One is Friends Church in Yorba Linda, California, a Quaker congregation with an evangelical megachurch worship style where members are finishing production on a film called Not Today.

"I still hear people say it in the church, 'What are we doing? We're making a movie? What are you talking about?'" Jon Van Dyke, Friends Church's media director, told the PBS show Religion & Ethics NewsWeekly. (Read a longer version of this story, and see the video report, here.)

Van Dyke is director of Not Today, which tells the story of a spoiled young American who goes on a partying trip to India and gets pulled into the search for a little girl sold to human traffickers. The film was partly shot in India and centers around Dalits, the so-called "untouchables" on the lowest rung of the traditional caste system. Friends Church connected with Dalits during mission trips. The church committed to help free Dalits who had been trafficked and to build 200 schools for Dalit children. And, because the congregation is in the back yard of Hollywood, members decided to make a movie as well.

"It wasn't just to make a movie, because we're not in the movie business; we're a church," said Matthew Cork, the congregation's lead pastor. "But as a church, we do have an obligation and a responsibility to tell the message, and we believe that this was the best way for us."

Is it a good idea?

Some experts question whether this is something local churches should be doing.

"I guess I have an outdated notion that churches are there to inspire parishioners to then go and do things, in whatever genre, whether it's politics, or media, or whatever," said ... 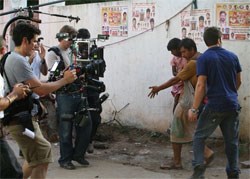