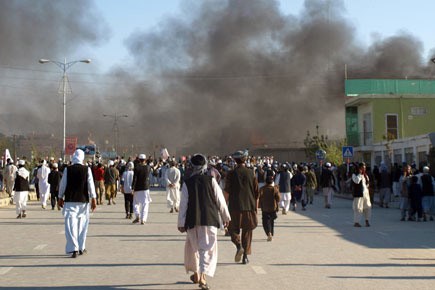 "Together with the American people, I offer my deepest condolences to those injured and killed, as well as to their loved ones," Obama said.

Others lay blame for the deaths at directly Jones's feet.

"Showing blatant disrespect for Muslims by burning their scriptures directly contradicts the example and spirit of Jesus, who taught us to love our neighbor as we love ourselves," said Galen Carey, director of government affairs for the National Association of Evangelicals.

"Those who burned the Qur'an do not represent the vast majority of Christians, who wish to live in peace and harmony with their neighbors."

Welton C. Gaddy, president of the Washington-based Interfaith Alliance, called the riots an "unacceptable" response to the Qur'an burning, but said they show that actions in the U.S. can have consequences overseas.

Jones is pastor of the independent Dove World Outreach Center, which has about 30 members. Jones has launched a new organization, Stand Up America, to protest the Qur'an, Shari'ah law and "radical Islam." He has scheduled an April event in front of an Islamic center in Dearborn, Michigan.

Burned by the Qur'an Burning | Our media culture values outrage over truth. We can do better. A Christianity Today editorial (October 25, 2010)

Qur'an Burning: The Neverending Story | Everybody who is anybody has said something about what may be nothing. (September 10, 2010)

Militia Group Says Burning the Qur'an is un-Christian | The pastor behind next month's event accuses the armed conservative group of "giving in to pressure and fear." (August 25, 2010)