The inspiring true story of surfer girl Bethany Hamilton's courage and faith after a shark attack.
Carolyn Arends|April 8, 2011
Our Rating

Bethany Hamilton has a story worth telling. Born and raised on the island of Kauai, Hawaii, Bethany was a natural surfer already winning competitions and securing endorsements as a pre-teen. In 2003, at the age of 13, her promising future appeared to be jeopardy when a 15-foot tiger shark bit off her left arm in a well-publicized attack. The fact that she survived—despite losing 60 percent of her blood—is a miracle; the way she has thrived ever since is astonishing and, it would seem, perfect source material for a feature film. Enter Soul Surfer, an imperfect but compelling movie that succeeds largely on the strength of Hamilton's incredible-but-true story.

Aspects of her journey have already been well documented, from the extensive media coverage of her accident, to her own biography (2004's Soul Surfer: A True Story of Faith, Family and Fighting to Get Back on the Board) and the 2007 short-film documentary Heart of a Soul Surfer. Challenged with translating so much already-familiar material for the big screen, Soul Surfer's producers wisely sought out an accomplished cast.

AnnaSophia Robb (Race to Witch Mountain, Bridge to Terabithia) is strong in the central role, capturing both Bethany's resiliency and her vulnerability with natural charisma. Dennis Quaid (Vantage Point, The Rookie) brings plenty of heart to the role of Bethany's father, Tom, and Academy Award winner Helen Hunt (What Women Want, Pay It Forward) is a touch wan but convincing as Bethany's worried mother, Cheri. Most of the supporting cast is strong as well, including Lorraine Nicholson (Jack Nicholson's daughter) as Bethany's best friend, Alana Blanchard, TV veteran Kevin Sorbo as Alana's father and a key participant ... 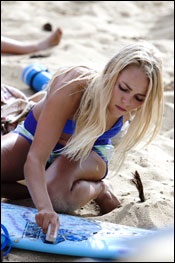