Emma Stone was hardly alone in her ignorance about daily life for many African-Americans in the Deep South during the days of segregation, at a time when the civil rights movement was just gaining speed.

Stone is only 22, and she grew up in Arizona, a long way from the tensions that still sometimes rear their ugly head throughout those southern states. But this summer's busiest actress (Easy A; Crazy, Stupid, Love; Friends with Benefits) now knows the story quite well thanks to her lead role in The Help, opening nationwide tomorrow.

In the film, Stone plays Skeeter, a new college grad who wants to publish the story of several black maids in 1960s Mississippi. Stone learned plenty about their lives in preparing for the role, in reading the best-selling Kathryn Stockett novel upon which the film is based, and through conversations with co-stars Viola Davis and Octavia Spencer, who play two of the maids—"the help"—in the movie.

"I found myself learning the history of the time period in the Deep South," Stone said in a recent post-screening Q&A attended by CT. "Being raised in Arizona, my knowledge of the time period consisted of the stories of Rosa Parks and Martin Luther King, Jr. That's it. How are so many people from my generation not aware? This just happened. And yet we learned so much about ancient Roman history.

"On a personal level, I'm so grateful this film came into my life. It shone light on this period in history that I knew remarkably little about. I felt like Skeeter and I were learning at the same time."

Spencer (Seven Pounds; Dinner for Schmucks), who plays the feisty, outspoken Minny Jackson, had some reservations about playing a maid. "The first time I read through the manuscript I was a little taken ... 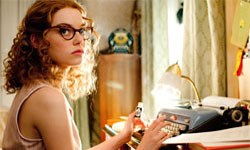