By the time he was in his mid-teens, Ben Hall was playing guitar like Merle Travis, Chet Atkins, and Charlie Louvin, winning thumb picking contests left and right. By the time he was a student at Nashville's Belmont University, Hall had caught the eye of Louvin himself, prompting the legend to ask, "When can you go to work with me?"

Hall said he had to finish college first, to which Louvin replied in a huff, "You don't need to be in school. You are meant to be playing that guitar!"

The two reconnected in the summer of 2007, on Louvin's 80th birthday. Louvin invited Hall to join him on tour, and the rest is history. Louvin died earlier this year at the age of 83, but not before he had introduced the young Hall to the world—and to his record label, Tompkins Square, which released Hall's solo debut in March. The album features some terrific guitar picking as Hall covers classics by Travis, The Louvin Brothers, Roger Miller, Woody Guthrie, a few jazz standards, and more. (Click here to hear a sample.)

We recently caught up with Hall, who first started playing at the age of 6, to talk about the album and his unique style of music. The 22-year-old Hall talked to us from his Nashville home.

How would you describe the music you play?

I like to call it hillbilly Jazz. It's heavily influenced by the sounds of Merle Travis and Chet Atkins, my two favorite guitar players and musical heroes. Almost everything on the album is centered on the thumbstyle technique—the thumb plays the bass notes and chords while the first two fingers play melody and harmony notes. It gives the listener the idea of hearing more than one guitar, and it also comes in handy when I can't afford a band.

What turned you on to this type of music? 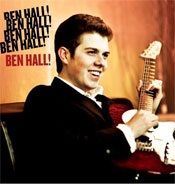