The Kingdom in Columbus

Why the world's largest Vineyard church is drawing people from 104 nations in central Ohio.
Katelyn BeatyDecember 14, 2011
Image: Nick Fancher
This article is from the December 2011 issue. Subscribers can read all of CT's digital archives.

The day they arrived at the church's doorstep on a sweltering July morning in 2010, Venant and Nshimira were weary travelers losing faith in God's provison. Refugees from the volatile eastern Congo, the couple had been resettled the previous September in Columbus, Ohio. Among their few possessions was a box stuffed with legal documents, leftovers from their case recently abandoned by a resettlement agent. When they arrived in Columbus, they had joined a French-speaking group for African expats, whose leader, Emmanuel Sotondji, invited them to accompany him to his church of a decade, Vineyard Columbus (VC), in suburban Westerville.

"The first time I saw Venant, his face showed so much fear," remembers Chris Childers, a social worker at VC since 2009. "He wasn't sure where he was in his faith."

And for good reason. Venant had been tortured by soldiers of a Rwandan terrorist group and suffered severe back and neck pain. He and Nshimira spoke zero English. Their furniture was a mattress and chairs with no backs; their six children slept atop blankets strewn across the linoleum kitchen floor of a two-bedroom apartment.

Childers immediately brought her 25 years of social service work to bear. She discovered they were eligible for food stamps and health benefits and could reduce their electric bill, which was burning through 10 percent of their income. She recruited another VC minister to gather layette supplies and furnishings for the couple's seventh child, arriving any day, and e-mailed VC's staff members, who brought a truckload of furniture in two days. She located an esl class within walking distance of the apartment (learning English is required for continued federal benefits). ...

The Kingdom in Columbus

The Kingdom in Columbus
expand
hide this 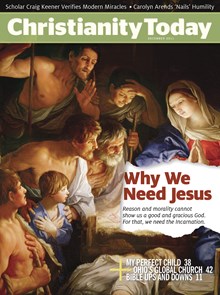 This article is from the December 2011 print issue. Subscribe to continue reading.