Meryl Streep shines as Margaret Thatcher in a film that tries to do too much.
Camerin Courtney|December 30, 2011
Our Rating

British biopics have been a steady favorite in recent years, offering both compelling character studies and standout performances. Think The Queen (about Queen Elizabeth II) and The King's Speech (about King George VI). The latest British leader to be added to this growing genre is Margaret Thatcher in The Iron Lady.

The film begins with an aged Thatcher (Meryl Streep) at home. She's getting ready for the day while chatting with her late husband (Jim Broadbent) - flitting back and forth between memory, dementia, and lucidity.

She overhears the voices of her staff in the hall, whispering concerns about her increasing breaks with reality. But concerns about Margaret—whether they be about her health, her gender, her politics—are nothing new. And neither is her determination to prove all the naysayers and worriers wrong.

Cue the flashback of Margaret as a young girl (played by Alexandra Roach), listening to the progressive politics of her father, a local grocer. At home and in the family business, she learns the value of hard work, the need for wise business practices, the power of her own voice—even her female voice.

She carries this knowledge with her into adulthood and her foray into local politics, where she has to fight to be taken seriously as a woman, and one with working class roots to boot. But she learns how to play these differences as strengths, largely with the help of her husband, Denis (young Denis is played by Harry Lloyd). With his pedigreed background and feisty, fun-loving spirit, he's a great balance to Margaret's humble history and steely determination. Their chemistry is endearing.

Back in the present day, Margaret's daughter Carol (Olivia Colman) has arrived for a visit. As Carol keeps an ... 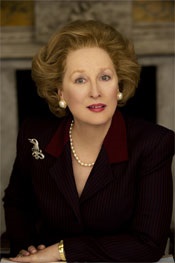