Since having a few big years in CCM, Shaun Groves has been focusing on his work with Compassion International.
Christine Hoover|February 22, 2011

Shaun Groves burst onto the Christian music scene a decade ago with his debut album Invitation to Eavesdrop, which garnered six Dove nominations, including New Artist and Song of the Year for the chart topping hit "Welcome Home." He toured with Bebo Norman, Jars of Clay, and Michael W. Smith. He made a second record, Twilight. But even with the success, Groves was reevaluating his purpose.

Today, Groves has left much of the CCM scene behind. He still writes songs, but is also a speaker, blogger, and spokesperson for Compassion International, a Christian child advocacy ministry. We recently spoke with Groves about what drives him today.

When you first started in Christian music, what were your goals?

I had no great ministry goal. I just wanted to feed my family and make music. I felt like God had given me a few things to say, mainly to challenge Christians to know God and make him known.

How did you feel after your first album was such a success?

For years, I had insecurities about not having been successful at things I thought I should have been successful at: athletics, academics, and making money. I didn't feel valuable in high school because I was none of those things. The genius of God is that he gave me what I wanted—success, a sense of popularity, money—so that I could see that they were just new responsibilities. It intensified the questions I was asking myself: Why am I here? What is my purpose? [The success] was a tremendous responsibility and opportunity, and I didn't want to waste it.

When did you sense your goals beginning to change?

When I was on the road with other musicians, I heard why they were doing what they did. I saw what I did and didn't want to be. I had good mentors—older guys at my church—that ... 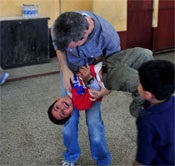