On his new album, 'Leaving Eden', Brandon Heath explores the fall of man—including his own—but keeps turning back to the hope of Christ.
Mark Moring|January 18, 2011

Two years ago, Brandon Heath was just another promising musician waiting for his big break. He'd had one minor hit, "I'm Not Who I Was," off his first album, but it wasn't till "Give Me Your Eyes," from 2008's What If We, blew up the charts that Heath had clearly become a star. (And even among the stars: "Give Me Your Eyes" was the official wake-up song for the Endeavour space shuttle crew last February.) The song was No. 1 at Christian radio for an astonishing 14 weeks, and won a Dove Award as 2009's song of the year.

But all was not glitter and gold in Heath's world. He'd recently emerged from a difficult breakup, and was wrestling with personal demons from decades past. His parents had divorced when he was young, and the broken home life had left its share of scars. A counselor helped Heath work through his pain by encouraging him to go back to the beginning—not to his childhood, but to the beginning of humankind, to Genesis, and to the Fall of Man in the Garden of Eden. Heath was urged to mourn Adam and Eve's original sin, and its consequences for us all.

Which brings him to his third album, Leaving Eden, releasing today. We chatted with Heath, 31, about the new album, how he's grown through painful seasons, and about his hopes for the years ahead. But not before we asked about his real name …

I recently learned that your real last name is Knell, and your middle name is Heath. Why'd you drop the Knell?

There's a funny story behind it. Before I was doing music fulltime, I was on the road with a buddy, and we were joking about what our stage names would be. I said I'd thought about using my middle name because people often mispronounce or misspell my last name, with the silent "K." But then I said, "I don't know, ... 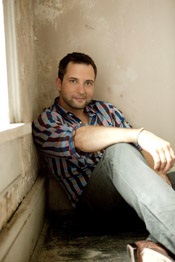