Tom Hanks and Julia Roberts in a rom com. A slam dunk, right? Unfortunately, no.
Frederica Mathewes-Green|July 1, 2011
Our Rating

Picture Tom Hanks. Got it? OK, now picture a guy whom Julia Roberts would find so overwhelmingly yummy that she would not only kiss him with the enthusiasm of a golden retriever, but even try to jump up and wrap her legs around his waist. Now, very slowly, try to merge those two images.

No doubt about it, Hanks has achieved more than many another Hollywood name. He has delighted us in movies like Big (1988) and Sleepless in Seattle (1993), astounded us in Cast Away (2000) and Apollo 13 (1995), and brought history majestically to life in Forrest Gump (1994). With so much going for him, it's a little embarrassing that, for his second directorial effort (the first was 1996's charming That Thing You Do), he has handed himself such a bouquet of vanity.

Everyone in this story admires Hank's character, Larry Crowne. Others say, "You're a great student," "You have a grasp of my concepts like few others," "You're way cooler than you look," and Julia Roberts hands him her heart, and all adjacent regions, on a platter. Larry is just a modest, honest, hard-working guy, who is somehow surrounded by a whirl of admiration. Other characters look at him and they get a kind of glow. When you're both director and screenwriter (writing credits shared with Nia Vardalos of My Big Fat Greek Wedding), you can do that.

When the story opens, Larry is a happy employee of U-Mart, a big box discount store. But instead of the 9th "Employee of the Month" award he was expecting, Larry gets downsized; he isn't eligible for the advancement track because he never attended college. (After high school, he spent 20 years as a Navy cook.) ... 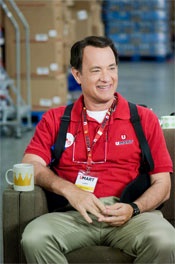