New documentary gets you thinking seriously about the issue of food economics and stewardship.
Mark Moring|July 20, 2011

I've never personally done any dumpster diving, but I've eaten plenty of food that was headed to the garbage bin. My wife and I are former members of a "food co-op" which works with local grocery stores to collect food they were planning to throw away—perfectly good food to be discarded due to an overly cautious "expiration date" on a label—and then distribute the stash among several families. It was a great way to keep a lot of food from going to waste, to save money on our grocery bills, and to feed our family well.

It was a tiny role in helping America waste just a little less of the 96 billion pounds of food thrown away annually. Did you catch that? Ninety six BILLION pounds.

The new documentary Dive! Living off America's Waste (First Run Features), releasing to DVD today, explores the trend of dumpster diving and how much unspoiled food we toss aside daily (263 million pounds). According to the film, the U.S. ends up throwing away about half of the food we produce every year. All while billions around the world are starving or on the edge of malnutrition.

Christians like to use the word "stewardship" when it comes to our money and resources. Watch Dive! with the phrase "stewardship" on your mind, and you might want to throw up. You might gag at the idea of rummaging through dumpsters behind a grocery story looking for edible food, but that's precisely what the players in this film—including director/editor Jeremy Seifert—do on a consistent basis, often in the middle of the night, when they're least likely to get caught by police. But as one of the young men in the film states, how can anyone in good conscience arrest somebody who's digging through a dumpster for food—even if that dumpster ... 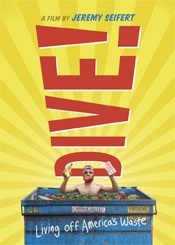