Though silly and disposable, the film's heart and physical comedy make it relatively satisfying.
David Roark|July 8, 2011
Our Rating

When the ad campaigns for Zookeeper began, with movie posters flooding the courts of the NBA playoffs and a trailer that suggested Mall Cop meets Night at the Museum, the film looked more than unappealing. It had the appearance of a dim, cheesy product like all the latest disappointments from Happy Madison productions. As it turns out, the inferences surrounding it definitely hold true. Zookeeper exhibits no brains and a silly sense of humor. But surprisingly, those things, combined with some fine physical humor from Kevin James, prove to make for a relatively satisfying family comedy.

The story, which borrows from many films we've seen, centers on a kind but brokenhearted zookeeper named Griffin, played remarkably by James. In the open sequence, we learn why he's so down. After proposing to his beautiful blonde girlfriend (Leslie Bibb) beside the ocean, following a romantic horseback ride on the beach, he receives a harsh and shocking "no." Evidently, he didn't turn into the dream man she always wanted. Five years later, Griffin is still troubled by the event. He can't move on.

So when Stephanie suddenly shows up for his brother's (Nat Faxon) wedding, Griffin falls right back in love; all the feelings he's been trying to quash come right back to the surface. When the zoo animals realize this and overhear Stephanie speaking of her feelings and plans for Griffin leaving the zoo, they have to make some big and quick decisions. Not only do they break their code of silence—yes, they're talking animals—but they also devise a plan to help Griffin win Stephanie's heart so he can be finally be happy and, of course, stay with them at the zoo.

All sorts of shenanigans ensue, including a gorilla party at TGI Friday's and a ... 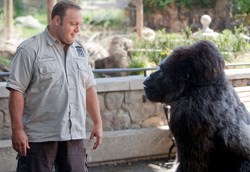