The recovering crack addict and baseball superstar knows he's special, but it's a special that cuts two ways.
Dan ReedJune 15, 2011
Image: Mark Peterman
This article is from the June 2011 issue. Subscribers can read all of CT's digital archives.

Rock bottom for baseball superstar Josh Hamilton came one night in the fall of 2005, when he woke up in a trailer surrounded by strangers. Confused, lost, and with nowhere to turn, he showed up at his grandmother's door at 2 a.m.

She didn't recognize him. Mary Holt's grandson had been a chiseled athlete, 6-foot-4, 230 pounds, who could hit the ball a mile and run like a gazelle. That night he was down to 180, cheeks sunken, eyes glazed over, his rail-thin body a complete mess.

Josh Hamilton was a junkie. He was bingeing on crack, downing a bottle of whisky every day, and burning through a $4 million signing bonus. Add a few recent suicide attempts, and there really was no tomorrow. Holt began nursing her strung-out grandson back to health, but with an ultimatum: Quit the drugs or move out.

Hamilton, now an All-Star outfielder for the Texas Rangers, has been clean ever since (he must submit to urine tests three times a week), and is arguably the best player in professional baseball.

"It's amazing I'm still alive after all I've done to my body," Hamilton told Christianity Today. "My granny told me during those days that God had something special planned for me, otherwise I would have died."

'I will Never be Normal'

Holt knew Josh was special. Hamilton has heard this his whole life, beginning in Raleigh, North Carolina, when as a 6-year-old, he was outplaying boys twice his age. As a high school senior in 1999, he managed a .556 batting average. The Tampa Bay Devil Rays made him their No. 1 draft pick and gave him that $4 million check before he graduated.

His career has been up and down, mostly because of injuries and battles with drugs and alcohol. But by ... 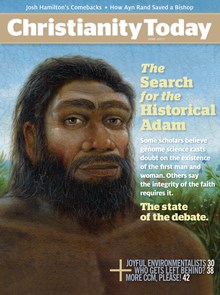