Their marriage already strained, a couple faces devastating news about their son. PLUS: Interview with Michael Sheen.
Kenneth R. Morefield|June 3, 2011
Our Rating

Beautiful Boy, winner of the FIPRESCI Prize at the 2010 Toronto International Film Festival and the feature debut from director Shawn Ku, begins with the depiction of a marriage on the rocks. Bill and Kate Carroll (Michael Sheen and Maria Bello) are in the stage where each spouse's every word is filled with icy subtext and parsed in the most aggressive and aggrieving way. When they receive news that their son was the perpetrator in a campus shooting—taking his own life after a killing spree—their horror paradoxically pushes them further apart while forcing them to also draw closer together. The name of the campus is never mentioned, but Ku, whose parents met at Virginia Tech, acknowledges it was that real-life tragedy that prompted him and co-writer Michael Armbruster to add the school shooting to what was initially conceived as a "story about a relationship."

The film has won praise in some quarters for its restraint, but at times it appears to be working so hard to not be exploitative that one has to wonder whether the campus shooting story was more of a burden than it was worth. While both Sheen and Bello are adept at suggesting deeper emotions behind the veneer of shock and numbness, that coping strategy holds the audience, like the rest of the world, at arm's length. The shooting is a catalyst rather than a cause, and when the climactic, volcanic argument finally comes, it actually feels a little too generic. He wasn't there. Her perfectionism smothered the son and pushed him over the edge.

But Beautiful Boy never really situates the couple in the world before depicting their isolation and withdrawal from it. Nearly every encounter Bill or Kate has with someone other than each other is designed to underscore ... 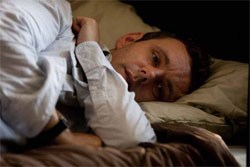