The terms "man date" and "bromance" are hardly new. The New York Times wrote about the former more than six years ago, and the latter was coined by the editor of a skateboard magazine in the late 1990s, describing the relationship between skateboarding friends who spent lots of time together. The terms (and ideas) have become Hollywood staples in recent years, as various films—notably I Love You Man and Superbadon the silver screen, and Mad Men on TV—have tackled the topic. And Esquire magazine asked on its May 2010 cover, "Are you man enough for the 'man date'?"

Though pop culture is showing more interest than ever in heterosexual male friendships, the ideas are almost as old as civilization, starting—at least fictionally—as far back as Fred Flinstone and Barney Rubble. Three thousand years ago, the Old Testament's David and Jonathan epitomized such a relationship, and in 300 B.C., Aristotle described the perfect friendship like this: "It is those who desire the good of their friends for the friends' sake that are most truly friends, because each loves the other for what he is, and not for any incidental quality."

But few have tackled the topic as deeply, poignantly, sensitively, and seriously as filmmaker Erik Santiago in his new 70-minute documentary, Five Friends, now available on DVD after multiple screenings to various groups, including church gatherings.

Santiago, who wrote, directed, and produced the film, started with a simple enough premise: Already the father of two daughters, he began to think more seriously about male friendships when his wife became pregnant with their first son. Santiago, in his mid-20s, sought the wisdom and advice of a good friend, Hank Mandel, almost twice Santiago's ... 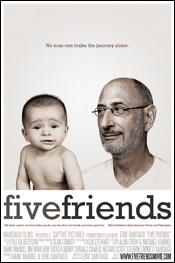