Michael Sheen discusses one of his most emotionally demanding characters in 'Beautiful Boy,' opening this week.
Mark Moring|June 1, 2011

You might not remember the name of one of the UK's finest actors, but you've certainly seen him—as Tony Blair in The Queen, as David Frost in Frost/Nixon, and even as a vampire (Aro) in the Twilight films. Now Michael Sheen, 42, takes on one of his most emotionally demanding roles as a devastated husband and father in Beautiful Boy, opening in limited release this week.

In the film, Sheen and Maria Bello play Bill and Kate, an unhappily married couple that are likely on the brink of divorce when they receive shattering news about their only child, a college freshman: The young man was the gunman in a mass shooting at school, killing many others before turning the gun on himself. How does a married couple cope with such news, news that could rip apart even the healthiest of relationships? But what would it do to a marriage that was already on the rocks? In this fictional drama—which was partly based on the 2007 massacre at Virginia Tech, where director Shawn Ku's parents had met and married—you might be surprised. The story ends on quite a hopeful note … but not before the characters wade through much pain, grief, confusion, and anger along the way.

CT spoke with Sheen about the film, about parenting (he and ex-girlfriend Kate Beckinsale have a 12-year-old daughter), and a recent, modernized version of a Passion Play that Sheen—who has said that he's not a Christian—wrote, directed, and played the lead role (a Christ figure) in his hometown of Port Talbot, Wales. The play was carried out in real time over the three days of the Easter weekend.

Why did you want to do Beautiful Boy?

I read the script and I and I felt compelled by the story and engaged by the characters, and it was about a subject ... 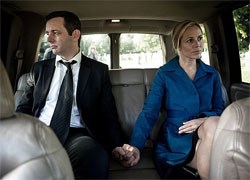