Anthony Heilbut can lay claim to knowing Mahalia Jackson better than almost anyone else living. He produced some of her seminal recording sessions, and walked away from the experience with his sole Grammy Award. In the new documentary Rejoice & Shout—playing in limited theaters—Heilbut speaks of Jackson in reverent terms. One comment is particularly striking. Explaining why Jackson's music resonated with mainstream audiences, he simply notes that she was presented to the public as "a great artist." He says it matter-of-factly, but his implication is clear: before Mahalia, he suggests, gospel musicians simply weren't regarded as great musicians by the average record buyer.

I'm inclined to say that this hasn't changed all that much. Gospel music is oft recognized more for its fervor than for its musicality; some folks think gospel is more about making a "joyful noise" than anything else. But this movie might change that thinking. Rejoice & Shout is not a movie about the gospel—if anything, the religious elements are played down—but it is, rather, the story of gospel as a music (specifically a black music). It's steeped in the stuff. It bears witness to its power and its majesty.

And while gospel music is presented here—at least initially—as something of a folk art, it's never written off as primitive, or as the province of amateurs. Actually, Heilbut—an author and record producer whose commentary is some of the most fascinating in the entire film—makes another illuminating comment about some of the early black gospel quartets. He notes that you could always tell a black gospel group apart from a white barbershop quartet because, though the style was similar, the black groups actually ... 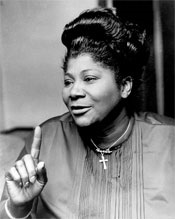