Overblown marines-fight-aliens blockbuster is devoid of anything amusing.
Brett McCracken|March 11, 2011
Our Rating

It's not a good sign when, at the end of an alien invasion movie, you're disappointed that the aliens have not emerged victorious. But such is the unfortunate case with Battle: Los Angeles, a film populated with human characters so lifeless, so uninteresting, and so painstakingly clichéd that out of pity we wish the aliens would just zap them all and be done with it.

Unfortunately for audiences, the bland characters in Battle do way too much talking, shouting, crying, and faux-emoting, all with much less personality than their alien counterparts, who don't talk at all but look really cool (gooey, nasty little cyborgian death machines).

Battle: Los Angeles is essentially a first-person shooter video game masquerading as a movie. The negligible plot consists of mysterious UFOs that crash into major cities around the world (they're first thought to be an inexplicably coordinated array of meteors) and then hatch hordes of alien warships bent on obliterating everything in sight. A band of marines, led by burnt-out staff sergeant Michael Nantz (Aaron Eckhart), are tasked with the responsibility of battling to save Los Angeles, which they endeavor to do through a series of gunfights, explosions, and war movie tedium. Along the way the marines pick up a few civilian survivors, including cute little kids and a woman (Bridget Moynahan) who provides a serviceable pseudo love interest to Nantz.

Directed by Jonathan Liebesman, BLA—a fitting acronym—purports in its marketing materials to be vaguely inspired by an apparently historical event in Los Angeles in 1942 when the military responded to UFOs (thought to be Japanese bombers) hovering above the city. But this is never actually alluded to in the film, nor are there ... 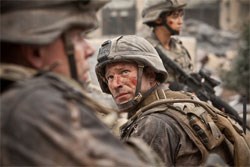