'The Adjustment Bureau' writer and director tackles the question, "Why are we here?"
Camerin Courtney|March 1, 2011

What possesses a screenwriter to tackle the huge issues of fate and free will in the context of a big-screen romance? "Naiveté?" George Nolfi, writer and director of The Adjustment Bureau, responds with a laugh. The film, starring Matt Damon and Emily Blunt, opens Friday.

In an interview with Christianity Today, Nolfi says that "the questions of why are we here, what makes life meaningful, and how much can we choose our own course have interested me for as long as I can remember." Raised in an Episcopal/Catholic family, Nolfi earned degrees in philosophy and political science at Princeton, Oxford, and UCLA. So when his producing partner brought him the Philip K. Dick short story "Adjustment Team"—which deals with fate personified as a bureau of agents—and suggested Nolfi do it as a love story, "I took immediately to that idea."

The result is a film about a New York politician, David Norris (Damon), who falls quickly for a free-spirited ballet dancer (Blunt), but is immediately told by some mysterious agents of fate that he's not supposed to be with her, that their relationship would destroy the impressive plans that "The Chairman" has for each of their lives. The man, David, must decide whether to follow his fate or fight for something different.

"The movie grapples with what all human beings—religious and philosophical—have to deal with: Are our lives determined? Or are they really chosen?" says Nolfi, who also wrote screenplays for The Bourne Ultimatum and Ocean's Twelve. Though the Adjustment Bureau agents seem to be working against David when he exerts his free will, close observers will notice other forces at work—chance? The Chairman?—in his life as well.

"From a Calvinistic perspective, ... 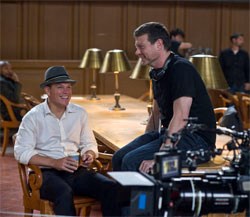