Adapting Charlotte Bronte's greatest novel has never been easy; previous versions have often been overblown or underwhelming, and the book itself, told with a lengthy girlhood prelude preceding the main narrative, does not lend itself to a fluid adaptation. At times, it falls into Victorian purple prose. And to make matters, if not worse, then more difficult, Jane Eyre is at its core a Gothic novel, with all the right bits: grand old houses on the moor, stormy-tempered gentlemen, hidden rooms, secrets dark enough to shock even the modern viewer.

Jane Eyre is not a morality tale. But though it is at its core a story of redemption, and even faith, when read truthfully it's a bit scandalous—even vaguely erotic—around the edges. Such a story, too faithfully adapted, is a melodrama.

But literature lovers, rejoice: Cary Fukunaga's lean, restrained, and gorgeously shot adaptation preserves all the best of the story without falling into its traps. And that's not easy with a tale like this—beginning, as it does, with a miserable Jane (Mia Wasikowska) running headlong out of Thornfield Hall and into a stormy landscape, weeping and struggling against the weather, pursued by whispers from beyond. She is rescued by young country minister St. John Rivers (Jamie Bell) and his two sisters, who nurse her back to health, then give her work and a home.

As she slowly moves toward restoration, she is haunted by recollections of her past: a childhood spent first abused by the aunt who had sworn to take her in and treat her well, then at the dismal Lowood school, where the first person to show her kindness, a fellow student named Helen Burns, dies in her arms. Piety is linked with severity and entirely divorced from love in Jane's ... 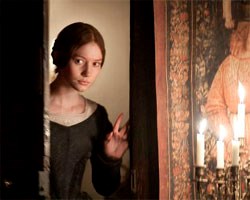