This thriller about pills that make you smarter is really pretty dumb—but in a good way.
Josh Hurst|March 18, 2011
Our Rating

Would that I could say there was a single moment when you might stop and think—just for a moment—how truly stupid this movie is. In actuality, though, Limitless is a film that grabs hold of absurdity early on and never loosens its grip, practically flaunting its own audacious silliness every step of the way. Nevertheless, there are a handful of moments that stand out from the rest, seeming, perhaps, to plumb whole new depths of ridiculousness. You'll know them when you see them: One involves an ice skate, and the biggest one of them all might go down in history as the all-time worst homage to Twilight and True Blood.

But then, of course this movie is stupid. Its premise is about pills that give you preternatural smartness—an inherently dumb idea, or at least one that would require a particularly deft touch in order to be anything other than pure escapist malarkey. In a way, it reminds me a little bit of Face/Off—wherein two men literally switch faces—or perhaps the kind of plot device Philip K. Dick might have written.

But this isn't quite Face/Off, and screenwriter Leslie Dixon is no Philip Dick. With Face/Off, as with Limitless, there was such a spectacular pile-up of stupidity that it was hard to take any of it seriously, but the film did flirt with some interesting ideas about identity in the modern world. Limitless, though it may carry the seed of an intriguing sci-fi concept, blows any real-world resonance it might have had with an ending that makes it perfectly clear: This movie is about nothing in particular. Greed, genetic engineering, drug abuse—these are all themes the story could have mined, and in the end they are all treated with utter ambivalence. 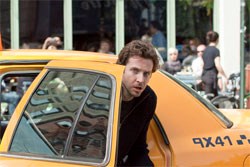