Red Riding Hood is a movie of a sort that I would very much like to see if anyone could make it, which is another way of saying that it is not that sort of movie at all. A real Hollywood fairy tale is the rarest thing in the world. Hollywood is more comfortable with myth and legend. Partly, I think, it's a matter of scale: Mythology provides the sort of sweeping, epic scope that lends itself to big-screen Hollywood feature filmmaking. Fairy tales are smaller and more intimate, and require a lighter touch.

Catherine Hardwicke, on the rebound from Twilight (she only directed the first of those films), doesn't bring that touch, instead blending fairy-tale imagery with overtly Stephenie Meyer-esque dark romantic fantasy. How overt? There's a romantic triangle with a teenaged heroine and two brooding suitors, one of whom may be a fearsome predator—a werewolf, in fact.

Amanda Seyfried (Mamma Mia!, Letters to Juliet) gets the Bella role as the titular red-caped heroine, here called Valerie. Shiloh Fernandez, whom Hardwicke almost cast as Edward in Twilight, plays Peter, the dark-haired bad boy who has the heroine's heart but tries to break it off for her own good. Max Irons is Henry, the less-exciting rival whose love for the heroine is unrequited. Would you believe Billy Burke, Bella's dad in the Twilight films, shows up as Valerie's dad?

In spite of all the Twilightery, the movie shows just enough interest in its fairy-tale inspiration to make its failure frustrating. Though certainly not for children, the violence and sexuality resonate with the psychological roots of the source material. Screenwriter David Leslie Johnson (Orphan) makes some potentially interesting decisions, Julie Christie's freespirited, hardly doddering ...

Our Rating
not rated
Average Rating
(8 user ratings)ADD YOURS 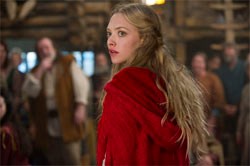