Based on a true story, an 84-year-old Kenyan man seeks an elementary education.
Carolyn Arends| May 13, 2011
Our Rating

When the 2003 Kenyan government announces free education for all, Maruge (Oliver Musila Litondo) joins the throng of children at the gates of the village primary school, wildly enthusiastic about the prospect of literacy. He's motivated, focused, and determined to learn. And he's 84 years old.

School officials are first amused, then irritated by the old man's stubborn insistence that they find a place for him in the crowded classroom. But Maruge is not easily rebuffed, and when he shows up at the school in a makeshift version of the primary uniform, the head teacher, Jane Obinchu (Naomie Harris), resolves to let him join the First Grade.

Jane's decision is not an easy one. She and Maruge will face escalating opposition—first from school officials and local villagers who feel a coveted seat in the school is squandered on an elderly man, then from bureaucrats who fear Maruge will set a precedent for thousands of uneducated seniors, and eventually from local thugs who want in on the profits they imagine are being generated by Maruge's increasing notoriety. Complicating Maruge's own quest and his relationships with his fellow Kenyans are the ghosts of his past—he bears the physical and emotional scars of having been a prisoner of war in the Mau Mau uprising against British colonialism 50 years earlier.

The true, irrepressibly inspiring story of Maruge's somewhat complicated pursuit of education is the subject of The First Grader, a lovingly-crafted film that sometimes bogs down in its own earnest good intentions, but ultimately succeeds on the strength of its premise, the luminosity of its cast, and the visual charm of its setting.

Director Justin Chadwick (The Other Boleyn Girl) wisely insisted that the film be shot ... 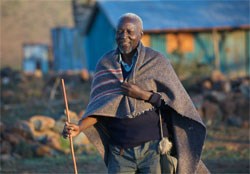