Formulaic wedding comedy with a lot of humor, heart, and, above all, forgiveness.
Kenneth R. Morefield| May 6, 2011
Our Rating

The film that Jumping the Broom most reminds me of is, oddly, Much Ado About Nothing (1993). That's not to suggest that script writers Elizabeth Hunter and Arlene Gibbs can rival Shakespeare, only that this is one of those movies that I suspect will engender criticisms grounded on what it is (a formula comedy) rather than in how well it accomplishes what it sets out to do (quite well, thank you).

By its nature, an ensemble comedy about a "downtown" man marrying an "uptown" woman will feature stock characters as their families get together: the rakish uncle, the jealous best friend, the domineering (potential) mother-in-law, the shrewish wife, and the henpecked husband. So too will it feature plot points that are as old as the bard: overheard conversations, miscommunications that keep genuine lovers apart, jealousies that flare up at just the wrong moment but buckle in the face of common sense when it's time for a happy ending. (For extra credit, you may now write an essay comparing Julie Bowen's hapless wedding planner in Jumping the Broom to Michael Keaton's Dogberry in Much Ado, and situate both in the literary history of hapless but well-meaning servants whose antics accentuate and comment upon the central characters' conflicts.)

The point is that comedy is about execution, not originality, and Jumping the Broom is pretty darn funny most of the time and kind of sweet the rest of the time. Full disclosure: I saw this primarily African-American film with a mostly black audience, and judging from the reaction, maybe ten percent of the humor was comprised of cultural inside jokes that went over my head. Even that was kind of refreshing in that it wasn't trying so hard to have "crossover" appeal that it lost the nerve to be ... 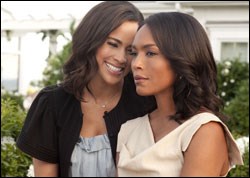