Mel Gibson's convincing performance as a depressed man doesn't make up for the film's lack of depth.
David Roark| May 6, 2011
Our Rating

For a movie about a guy who practices self-therapy with a Beaver puppet on his hand, The Beaver turns out to be surprisingly unoriginal. The new comedic drama from director Jodie Foster, which stars her and Mel Gibson, takes a whole slew of stories and themes from previous films and rehashes them into a middling work of cinema.

This banality is clear from the opening sequence. While a voiceover describes Walter Black (Gibson), the CEO of a toy company, as a man with severe depression, we recall similar scenes with Nicolas Cage in The Weather Man and Kevin Spacey in American Beauty. Like those veteran actors, though, Gibson gives an unforgettable performance as the central character. His turn offers the film just enough humanity to keep the trite ideas it's built upon from completely collapsing.

The clunky story centers on Walter who, after being kicked out of his house and attempting suicide twice, finds support in a ragged Beaver hand puppet. He tells his wife (Foster), sons, and employees that his psychiatrist prescribed it, but he's really just found his own way to treat his illness.

Foster, like the trailer depicts, tries to capitalize on this seemingly clever premise. Walter voices The Beaver with a thick British accent. He works, exercises, and showers with it on his hand. The concept boasts humor and innovation, though it's really nothing new; Lars and the Real Girl used an unlikely catalyst to bring redemption to a hurting man and the people around him.

The subplot is even more hackneyed. As Walter's older son, Porter, Anton Yelchin takes on the archetype of the rebellious son with daddy problems. Porter, a bitter high school nerd, hates his father. He writes down their shared traits on notes and posts them on his bedroom ... 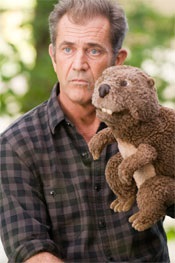