A biopic about the founder of Opus Dei falls flat and doesn't ring very true.
Frederica Mathewes-Green| May 6, 2011
Our Rating

First the bad news, for adolescent viewers, anyway: there don't be any dragons. Not the leathery-winged kind, at least. The title refers to a medieval map-making custom of inscribing the warning "Hic Sunt Dracones" on unexplored regions. In this case the warning refers to the unexplored regions of the psyche, where destructive emotions may lurk.

The film shows us the early life of Josemaria Escriva (1902-1975), recently canonized a saint by the Roman Catholic Church and best known as the founder of the organization Opus Dei. Escriva had an original, yet simple, idea: that a Christian can follow the path of holiness while living and working in the secular world. Of course, Christians have been shunning the world to live a life of radical dedication to Christ ever since St. Anthony of the desert. But, Escriva reasoned, Christ himself spent many years working in a carpenter's shop, while living in a village alongside ordinary people. Why can't Christians do the same?

The idea sounds benign enough, but some view Opus Dei with suspicion. The last time it showed up in a major motion picture was in The Da Vinci Code (2006), represented by an albino monk and murderer. Opus Dei members adhere to traditional Christian beliefs, and are suspected of (according to Wikipedia) "alleged secretiveness, its recruiting methods, the alleged strict rules governing members, the practice by celibate members of mortification of the flesh, its alleged elitism and misogyny, the alleged right-leaning politics of most of its members, and the alleged participation by some in authoritarian or extreme right-wing governments, especially the Francoist Government of Spain."

But if you're assuming the dragons in this film relate to Escriva's dark side, you'd ... 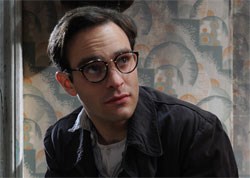