Martin Scorsese's latest tells of the power and wonder of film through one boy's redemption.
David Roark|November 23, 2011
Our Rating

In the final sequence of Hugo, Ben Kingsley's character, a legendary French filmmaker, says to an audience, "Come dream with me." These simple words capture the spirit and heart of this new 3D adventure from Martin Scorsese. Filled with substantive and visual awe, the film tells of the power and wonder of film through one boy's difficult journey to redemption. It also confirms a renewed optimism in its director.

The story, based on the 2007 Brian Selznick novel The Invention of Hugo Cabret, centers on Hugo (Asa Butterfield), a boy living inside the walls of a 1930s Paris train station. After losing his father (Jude Law) in a tragic fire, the orphaned Hugo went on to live with a drunkard uncle, and later on his own. He spends his days secretly running the clocks at the station and stealing parts to fix a broken automaton that he believes will mysteriously connect him to his father, whom he greatly misses.

Hugo's story merges with that of Isabelle (Chloe Grace Moretz) and her godfather, Georges Melies (Kingsley), a toy store owner with a mysterious past. In the wake of a fateful event, Hugo and Isabelle, also an orphan, form a relationship that takes them through a series of adventures. Hugo sneaks Isabelle into a movie theater for her first film, a Harold Lloyd picture. Isabelle introduces Hugo to a bookstore and the world of literature. Coping with the absence of their parents and searching for their place in life, the two form a unique bond, which Butterfield and Moretz leverage with their youthful chemistry.

Eventually, their bond begins to unlock a profound mystery surrounding their lives. When Hugo finds the missing piece to his automaton, a symbolic key that Isabelle wears around her neck, he not only discovers a message ... 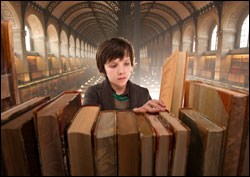