Here is what the people who made Immortals are counting on, I think: there is no movie so viciously unrestrained in its depiction of violent cruelty that someone won't label the person who calls it such a prude; there is no movie so sadistically stylized in its decapitations, impalements, eye gougings, and torture, that someone won't defend it on the grounds of being unrealistic and, hence, "just a movie"; there is no action so inherently revolting that it can't be accepted as entertainment if rendered in CGI; there is no violence that can be visited upon the human body in a military narrative that cannot be stripped of its ability to horrify by praising the warrior who risks enduring it so long as he mouths some politically cherished iconic word while doing so.

I am reasonably sure this film was pitched somewhere, in some room, as a cross between Clash of the Titans and 300. It has the former's mythological Greek setting and the latter's fetishistic sadism masquerading as a celebration of genuine military virtues. Mickey Rourke plays Hyperion, a hulk of a king who incessantly spits his food, chews with his mouth open, and slobbers over his beard. Rourke is a fine actor, but he is in a film where characters are given stock symbolic mannerisms to symbolize what the lack of a coherent plot cannot. He is pillaging towns trying to find and capture Phaedra, a "virgin oracle" who will have the ability to tell him where a supernaturally powerful bow has been hidden. He plans to use the bow to release the titans, a race of immortals imprisoned by the gods of Olympus after a war in heaven. Henry Cavill plays Theseus, a peasant that Zeus proclaims may be the only one who can stop Hyperion and of whom he paradoxically commands that ... 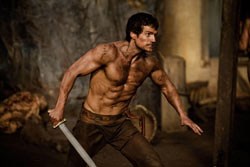