With his first greatest hits album, though he hates that term, Chris Tomlin reflects on his impact around the world.
Mark Moring|November 22, 2011

Chris Tomlin has sold tons of records, and more than 40 million people sing his songs in church every week. The man is a corporate worship song-making machine, with four of his compositions in the top 10 of the most sung songs in church, including the current No. 1 CCLI song in the world, "How Great Is Our God."

It's fitting that his first greatest hits compilation would take the name of that popular song. How Great Is Our God: The Essential Collection (EMI CMG) released last week, featuring 14 of Tomlin's top tracks, including seven that went to No. 1 at Christian AC Radio. The album includes new renditions of "Forever," "We Fall Down," and a special new "World Edition" recording of the title track, featuring multiple languages and the voices of influential worship leaders from around the globe.

We recently chatted with Tomlin about the new album, his career, and what it's like to have people all over the world singing your songs.

Why did you decide that now was the right time for a greatest hits record?

I've wanted to do it for a few years, and I've been looking for the right time. It's been a little over a decade now since I started, and I've been looking back and thinking Man, God has used so many of these songs in the church. I thought about doing it in 2010, but then I thought, No, I've got too many songs in me right now. I want to make another record first. So I did And If Our God Is for Us. After that, I thought, Okay, maybe now I can put out a collection of songs, a snapshot over the past 11-12 years.

I knew I wanted to call it How Great Is Our God, because Chris Tomlin Greatest Hits sounded dumb, stupid. I guess you could call some of them hit songs, but that's never been what it's about for me. I've tried to write ... 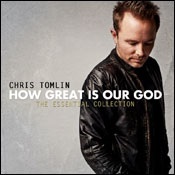