In Stephanie Meyer's vampires-meet-humans universe, one trumps the other.
Sandra L. Gravett|November 16, 2011

As the Twilight juggernaut gets into gear again this week with Friday's release of Breaking Dawn, Part 1, the frenzy about this story and these characters continues to fascinate millions while baffling others. For many Christian fans, this saga relates more than a tale of teenaged love and all of its trials and tribulations. These narratives raise issues related to faith, redemption, and hope as well as demonstrate positive values with regard to family, friendship, building community, and the expression of sexuality. But many overlook one of the more interesting religious themes: The idea of human free will and the importance of the ability to make moral choices stand out as central topics throughout the Twilight saga, although they are often confused by the idea that these characters exist in an eternally fixed and determined universe.

The core story of the series revolves around the obsessive love of the vampire Edward Cullen and the human Bella Swan. As the saga unfolds, each repeatedly asserts the inevitability of their bond; in their world, it really is destiny. Edward, for instance, believes he spent many of his 100-plus years (he was born in 1901, and turned into a vampire during the 1918 influenza epidemic) searching for something he could not find because Bella did not yet exist. He further determines that when he first meets Bella, the unique scent of her blood mystically drew him in and that his inability to hear her thoughts demonstrated her unique nature in relation to him. Bella, likewise, figures out relatively quickly that Edward is a vampire. While she understands the danger that represents, she also asserts that she cannot help but love him no matter what. Indeed, when he separates from her in the second ... 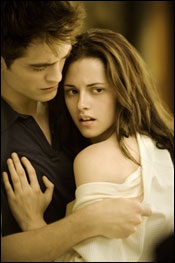