Three of comedy's top stars are utterly wasted on a lame script and lousy direction. This one's for the birds.
David Roark|October 14, 2011
Our Rating

If you've seen the trailer for The Big Year, you've basically seen the movie. As the preview suggests, the new family comedy hinges on a limited supply of cheesy jokes and a stellar cast—Owen Wilson! Jack Black! Steve Martin!—that couldn't be any less stellar.

The film, loosely based on a true story, centers on three "birders" in a competition to see or hear the most species in the United States in a single calendar year—a Big Year. But really it's about the birders and their individual lives, which is unfortunate, because the bird-watching concept and the birds themselves are fascinating, while the birders are not. In spite of being played by three talented actors, the characters hold no appeal, with no depth and no humor. And director David Frankel falls far short of previous efforts like The Devil Wears Prada and Marley and Me.

Black plays Brad Harris, a divorced loser who lives with his aging parents—an underused Brian Dennehy and Dianne Wiest—but here, Black finds no opportunities to shine. His character, a mostly serious type, remains totally flat throughout the entire picture. Having already confirmed his inability to handle a dramatic turn, Black never gets a chance to employ his comedic smarts, which involve an excess of energy and absurdity, the very thing that's made him so watchable in the past.

Martin and Wilson do no better. When Martin halfheartedly delivers the trite, clunky lines of Stu Preissler, a retired CEO with an uncanny love for birds, an honest question comes to mind: What is a comical genius like Martin doing making these kinds of films? The veteran actor continues to spend the latter years of his career taking part in substandard family fare as if he couldn't find any ... 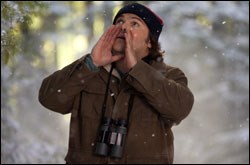