A dumbed-down, sexed-up remake, shying away from critiquing the church but also from its Christian worldview.
Steven D. Greydanus|October 14, 2011
Our Rating

"Because it might lead to dancing" is the punchline to a old joke with a number of denominational and other variations, all having to do with why Christians of a given persuasion are against sex before marriage—or in general.

Flip-flopping Christian moral concerns about dancing and sex along a different axis, Herbert Ross's 1984 dance movie Footloose proposed that not allowing kids to dance would lead to trouble. A small-town crusade against the evils of rock music and dancing, led by John Lithgow's hidebound, authoritarian Rev. Moore, created a repressive environment in which bored kids acted out in unhealthy ways until big-city new kid Ren McCormack (Kevin Bacon) led a dance revolution that helped the town relax and get its groove back.

I have no nostalgic brief for the 1984 Footloose, which I saw for the first time only recently. It's no classic, but I was mildly surprised at how comparatively engaging it is. The setup of square patriarchy versus hip youth threatens to devolve into church-bashing, but Ross's film subverts this to a degree: Rev. Moore is gradually humanized, while Ren is ultimately seen, smart-alecky attitude notwithstanding, to be a decent kid. What could have been an anti-church motif ultimately becomes an affirmation of a more moderate, relaxed Christianity.

In general, the remake cleaves faithfully to its source material, often beat for beat and line for line, though some lines are used in different contexts and with different meanings. As Ren, dancer Kenny Wormald is a likable presence, and while he doesn't have Bacon's charisma and doesn't try, he doesn't need a body double for the dance sequences. Miles Teller ably fills Chris Penn's shoes as Ren's new friend Willard, a scrappy local boy who ... 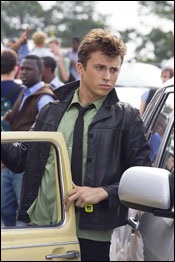