A 16th century Dutch painting, 'The Way to Calvary,' comes to life in this astonishing work of sacred art.
Steven D. Greydanus|October 21, 2011
Our Rating

There is a moment in The Mill & the Cross in which the power of art, in particular sacred art, to capture the eternal in the hugger-mugger of ordinary life—and even in the most horrific and seemingly meaningless events—is revealed with stunning clarity. André Bazin, the great Catholic film critic and theorist, wrote about the mission of art to rescue the world from transience and corruption, to capture moments and events in time and space before they slip into the irretrievable past, and so bear witness to the hand of God in creation. I don't know if I've ever seen this idea more resoundingly affirmed than in The Mill & the Cross.

If that description intrigues you and makes you want to see the film, I almost think you should stop reading here until you've had a chance to see it, especially if you're lucky enough to catch it on the big screen. I've seen The Mill & the Cross twice, and I'm grateful that I went into my first screening stone cold, without having read a single review or description.

Coming out of my first screening, I wanted more than reviews: I wanted a book, preferably well illustrated with photographs. I was gratified to learn that there is such a book—two books, in fact. The Mill and the Cross, by art critic Michael Francis Gibson, is an analysis of Bruegel's 1564 painting The Way to Calvary, and inspired the film, which Gibson cowrote with Polish artist and filmmaker Lech Majewski. Gibson and Majewski also collaborated on a second, expanded edition of The Mill and the Cross that combines images from the painting and Gibson's text with notes from the film production as well as photographs and storyboards.

The Mill & the Cross (the film; note the ampersand) is thus a sort of dialogue ... 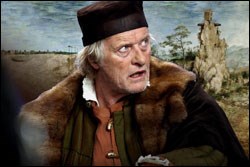