Categorizing The Presence isn't easy, but that's partly what makes it such an intriguing little film. Though first and foremost a ghost story, it shouldn't be considered horror. And although largely a thriller, there's a romantic drama at the core which also touches on supernatural Christian beliefs. All that and it's essentially a silent movie for the first seventeen minutes.

Interest piqued yet? Stylistically, The Presence brings to mind a wide range of sources: the suspense of Alfred Hitchcock's award-winning Rebecca; the nuanced supernatural mystery that made M. Night Shyamalan's The Sixth Sense a hit; the quiet solitude that made Stanley Kubrick's The Shining so foreboding; and, without saying too much, the sort of thing you might find in a Frank Peretti novel.

Writer and director Tom Provost (who co-wrote the legal drama Under Suspicion) successfully juggles all these genres and themes in this independent production. He quickly creates an air of mystery and tension that will cause viewers to wonder what exactly is going on—and the less you know going in, the better.

With stunning cinematography, The Presence begins by establishing a charming cabin secluded in the deep woods of Oregon. A mysterious figure (Shane West) is watching at the window. Is he the owner? Is he waiting for someone? We don't know initially; his quiet "presence" (and West's expressive eyes) suggests both gentleness and malevolence.

Before long, a stranger (Academy Award winner Mira Sorvino, a Christian) arrives during a thunderstorm. This woman (whose name is never revealed) turns out to be a writer looking for some getaway time at her late father's cabin. But how she interacts with West's character, well, that's the mystery that defines this ... 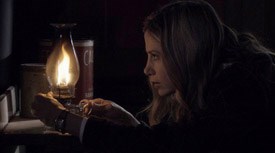