Real Steel aims to be an inspiring, feel-good family drama about an estranged father and son learning to appreciate one another. That's not what I expected, considering that the setting of competitive robotic boxing is inspired by a short story by horror/sci-fi writer Richard Matheson (best known for dystopian novel I Am Legend). Early promos called it "a gritty, white-knuckle film" about a shattered former boxer adapting to a new world where robots have made human fighters obsolete.

I saw potential for Children of Men or Minority Report crossed with Raging Bull. What I got was a kiddie-sized Rocky with Jake Lloyd's annoying Anakin Skywalker playing Mickey to a forgettable robot that looks like a dude in a fencing mask.

The film is set in the late 2020s when robot boxing has become a major sport fought in both giant arenas and small, seedy clubs. Ex-boxer Charlie Kenton (Hugh Jackman) is a self-obsessed, cocky loser. The change in the sport has relegated Charlie to being a low-end promoter of robot boxers. He's hit rock bottom, so he'll take any match he can for his rickety old bot—including fighting bulls at rodeos. And then he finds out he has been given custody of his super annoying 11-year-old son Max (Dakota Goyo)—and neither wants anything to do with the other. But when forced to spend time together, they reluctantly partner to train an old sparring bot found in a junkyard. Can this old piece of junk—built to take punches but not deliver them—become a Cinderella? And can Max and Charlie learn to love each other?

My biggest problem with Real Steel is that it's just not very real. Just as machines have replaced flesh-and-blood boxers, so the film substitutes robotic plotting and heavy-handed manipulation ... 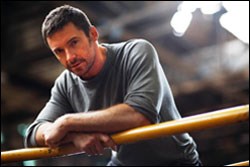