This atypical cancer movie is like 'Beaches' meets 'Superbad'—poignant and crude, and ultimately compelling.
Camerin Courtney|September 30, 2011
Our Rating

And then he gets diagnosed with a rare form of cancer, and is given a 50/50 chance of making it.

Adam also starts meeting with Katie (Anna Kendrick), the hospital's newbie shrink. Adam is her third patient ever and it's painfully obvious she thinks real life is just like all the textbooks she put in storage about five minutes ago.

When chemo starts, ushering in painful side effects and eventually fear, Adam realizes he can't do this alone. He's going to have to inconvenience others. And he slowly starts to face that fact that all his attempts to avoid risk and danger—like not learning how to drive—didn't really protect him after all. Maybe he was a little too fine all along.

50/50 was written by Seth Rogen's friend Will Reiser, a TV and movie producer who dealt with his own cancer diagnosis at a young age. "We thought the best way to pull something good out of the situation was to get him to write a screenplay," Rogen is quoted as ... 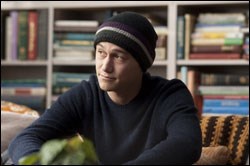