Frighteningly real, this well-acted biological disaster thriller makes us ask, "What if?"
Brett McCracken|September 9, 2011
Our Rating

Contagion opens with Gwyneth Paltrow coughing. She's on her cell phone at an airport, about to board a flight. Cameras observe the various things she is touching, the ways germs are being transferred. A few scenes later—after a fast-paced montage shows a handful of other coughing individuals in places like Hong Kong and London—Paltrow's character returns home to her husband (Matt Damon) and young son, her violent illness worsening. Within the film's first five minutes, she is dead and autopsied, and so is her son.

The fast paced, take-no-prisoners opening of Contagion sets the tone for the film. From the get go, director Steven Soderbergh establishes the pace (rapid), the scale (global), and the stakes (no one is safe—not even Gwyneth Paltrow and not even little children). From there, the film launches in to meticulous, globetrotting narrative of the pandemic outbreak of a mysterious, hitherto unknown virus that kills its victims within days. With a documentary-esque attention to detail and realism, Contagion takes a disturbing look at just what it might look like if, in 2011, an outbreak like this occurred.

Evoking his past ensemble-rich films like Traffic and Oceans 11, Soderbergh's Contagion alternates rapidly between a number of storylines related to the outbreak. Most prominent in the film are the characters from the Center for Disease Control, featuring Laurence Fishburne, Kate Winslet, and Jennifer Ehle as doctors tasked with understanding the lethal airborne virus and developing a vaccine before it gets out of control. Then there is Marion Cotillard as a World Health Organization official dispatched to East Asia to investigate the origins of the virus and pinpoint the location of the "index patient." ... 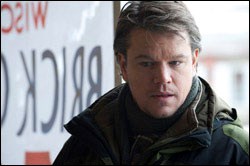