The remarkable creature—and the man of faith who took her in—behind 'Dolphin Tale.'
Lisa Ann Cockrel|September 22, 2011

When a movie hits the big screen it represents the sweat—and often tears—of a lot of people, from the stars on the marquee all the way to the people who cook the food eaten on set. Dolphin Tale, opening Friday, is no exception.

Produced by the same people who made The Blind Side, this family-friendly flick is based on the true story of Winter, a dolphin in Florida. Winter doesn't have a tail but does have a knack for inspiring people from all walks of life facing their own challenges.

David Yates, CEO of the non-profit Clearwater Marine Aquarium where Winter lives, first pitched Winter's story to the media. As man of faith, he sees God's hand on the production of a Dolphin Tale from day one. CT visited the set during filming in 2010, where we talked to Yates about Winter and the work of the aquarium.

What attracted you to the job with the aquarium?

We raised our kids in the Clearwater area and had taken them to the aquarium many times. But the CMA fell on hard times and when I was asked by the board of directors to do a turnaround, I thought it would be a nice thing to do for the community. I also liked the idea of working directly with marine life. One of our boys was a huge Steve Irwin and Crocodile Hunter fan growing up, so our house was always abuzz about animals.

How did Winter's story spread and eventually result in this movie?

When I started work here in February 2006, I had to move quickly to keep the aquarium above water. Around that time, Winter was rescued and came to live here. She was caught in a crab trap rope off the Florida coast and her tail was so badly damaged that she eventually lost it altogether.

As we worked to rehabilitate Winter, it became clear that her fight to survive was an inspiration ... 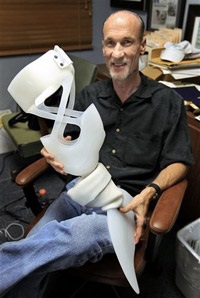